The hit Netflix sci-fi series Stranger Things takes place in the fictional 1980’s town of Hawkins, Indiana. The show follows a group of middle school kids fending off other-dimensional monsters and Russian conspiracy plots. The threats are significant, though they are entirely unnoticed by society, aside from the primarily juvenile cast. Today’s global central bankers are knee-to-eyeballs deep (U.S. the former, Japan, the latter) in fighting off monetary policy monsters, as well. Unlike the broader Stranger Things society, today’s market participants are preparing for the worst.

After a year of net tightening in 2018, central banks have begun to step on the easing peddle in 2019. On Wednesday alone, three central banks cut rates (New Zealand, India, Thailand) and two cut more than expected. Yesterday, Indonesia’s central bank cut rates for the first time in two years. The Fed’s latest policy action was a cut as well, and it halted the balance sheet run-off program earlier than expected.

This latest easing cycle is based more on potential risks and theoretical possibilities than actual soft economic data. Certainly, we’ve seen weakness in Germany and China, but the United States remains on solid footing. The Federal Open Market Committee said it best in its July 31st statement:

Information received since the Federal Open Market Committee met in June indicates that the labor market remains strong and that economic activity has been rising at a moderate rate. Job gains have been solid, on average, in recent months, and the unemployment rate has remained low. Although growth of household spending has picked up from earlier in the year, growth of business fixed investment has been soft. On a 12-month basis, overall inflation and inflation for items other than food and energy are running below 2 percent. Market-based measures of inflation compensation remain low; survey-based measures of longer-term inflation expectations are little changed.[1]

In summary, growth is moderate, employment strong, inflation muted, but we are cutting rates.

Employment is around its maximum sustainable level, while inflation remains within our target range but below the 2 percent mid-point. Recent data recording improved employment and wage growth is welcome.[2]

Same story – growth is moderate, employment strong, inflation muted, but we are cutting rates by even more than the market is expecting.

James Bullard, who is one of the largest “doves” on the FOMC (meaning he is relatively in favor of easing), recently implied the Fed is done with rate cuts for now. Yet the bond market continues to expect even more cuts. Fed Funds futures are pricing in another 0.25% cut in September to 1.75%-2.00% and a 90% chance of a cut to 1.50%-1.75% in December.

So what gives? There is clearly a disconnect between rhetoric and rate policy, and even more so between market pricing and central bank rate projections.

For one, supply in sovereign debt (risk free rate) is tight and this exacerbates market moves both up and down. The Bank of Japan owns about half of Japanese sovereign debt, while the European Central Bank owns about 35% of total euro-area debt. In today’s globalized interconnected markets, these central banks are driving down supply which directly impacts our Treasury market, and even down to the municipal bond market. The lack of supply forces more drastic moves in prices/yields. For example, on Wednesday the 10-year Treasury traded in a 13 basis point (0.13%) range from a 1.70% down to 1.60%, before touching 1.73% near the end of the day. There was minimal actual news during the day and, from a trading perspective, it simply felt like market momentum was the driving force. 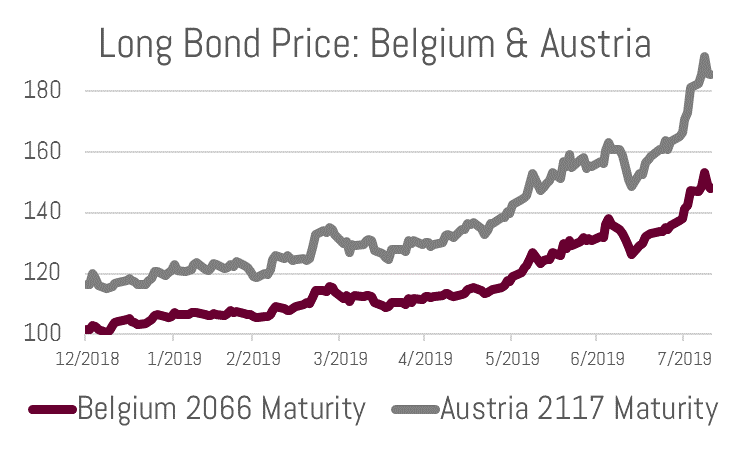 The recent downward momentum of rates – exaggerated by a lack of supply – is further intensified by the trade negotiation saber-rattling and what seems to be the deteriorating status of talks. On the bright side – barring economic collapse in China or complete breakdown of communications– talks are still scheduled for September.

Until progress is achieved on the trade front or we see renewed economic green shoots, this latest easing cycle will continue. We are experiencing many strange things in the bond market as over $15 trillion in sovereign debt trades at negative yields (the “Upside Down”), Germany’s 10-year is currently quoted at negative 0.57%, the 47-year Belgium bond is up 46%, while the 98-year Austrian bond is up 59% this year alone.

We certainly are in a new dimension of fixed income markets.