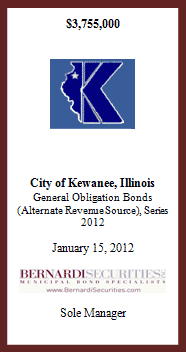 The City of Kewanee, Illinois successfully completed a $3.755 million general obligation, alternate revenue source transaction on January 15, 2012. Located in northwestern Illinois, the city has a population of approximately 13,000 as of 2010 census data. The bonds were issued to provide funds for various infrastructure improvements including street repairs, sewer and water main replacements, and repairs at both water and wastewater treatment plants. The bonds are rated “AA-” by Standards and Poor’s. Debt on the bonds is payable from the city’s one-half of 1% non-home rule sales tax, and from ad valorem taxes levied on taxable city property without limitation as to rate or amount. Principal and interest payments on the bonds will be insured under an insurance policy issued by Assured Guaranty Municipal Corp.

Bernardi in the News: City gets a good deal on bond issue Back To Municipal Bond Basics
Scroll to top